My favourite ever television programme when I was growing up was ‘Dynasty’. It was not just my favourite programme I was obsessed!! Thank God there was no internet then and no DVDs other wise I hate to think where this would had lead me. As it was I used to get into trouble at school at the time as Dynasty was my main and only concern!! I lived in fantasy land, and what a fantasy land it was!!! I was perfectly happy in my fantasy world full of glamour, love, lust and drama and I was probably only around eight years old! 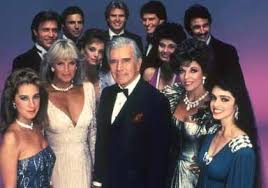 I remember the first time I saw Dynasty and I am talking about the original that screened from 1981 the one were Aaron Spelling took on Richard and Esther Shapiro’s idea of a very rich and powerful family who lived in Denver, in a large mansion and all their loves and hates with strong convictions, not the remake that is currently showing on Netflix in the UK. Dynasty in the eighties was shown on a Friday and it just so happened that was my sleep over night at my Nana and Grandad’s. That was lucky as I was allowed to stay up late and it was here that I discovered Dynasty, which fast became my favourite ever television programme. I now have all the episodes on DVD and I often enjoy re watching them all.
I have only managed to meet one cast member and that was Christopher Cazanove who played Ben Carrington. He was playing Captain Von Trapp in the ‘Sound Of Music’ tour and he was appearing at Hull New Theatre. It was a sold out tour and the best production of the Sound Of Music I have seen. Christopher Cazanove was such a lovely person, to me, and I have a special signed photograph and he also got the cast to sign the programme. Incidentally, playing Liesel, was Amanda Holden in her first professional role.

I am not sure what it was about Dynasty that captured my imagination so much but I do know I loved the beautiful clothes. The designer Nolan Miller gave the women the most glamorous clothes. Shoulder pads just got bigger and bigger but they made the waist look smaller. Alexis, played by the legend Joan Collins, had the dark hair, the red lips, the power suits and large accessories.”When everything matches, it creates a very intimidating look,” Nolan Miller is reported to have said. I remember her glamorous dark stockings and high heels, as well the veiled hats she wore. Krystle Carrington, Linda Evans, was the opposite. The good versus the evil. She was blonde with styled softly hair. She wore paler makeup and mainly wore clothes in beige, cream, gold and white. Both women held a fascination for me. I loved Krystle in that was whom Blake Carrington adored and idolised. Everybody loved her and she epitomises the warmth and the goodness in a woman but Alexis had the fire and energy. She was manipulative and could use her beauty to her advantage. You often felt it was the devil versus the angel.
Fallon was the care free daughter who could have fun and married the lovely Jeff who again idolised her. (A lot of this idolising women. No wonder I liked it!!) She had a more hippier look. Long flowing skirts and bellowing dresses.
Sammy-Jo was the tart with, sometimes, a heart and she wore short shorts and low cut tops or often just her lingerie!!
The men were dressed in their sharpest suits, most of the time. Nothing was ever hardly out of place. I wonder if this influenced me in the fact that I almost always wear makeup. I hardly ever will leave the house without being made up and often use it to mask true feelings. No such problem for the characters I idolised. They did not seem to have a problem speaking their minds. When you live in a mansion and are in charge of muti million pound oil companies, I suppose it is not so much a problem!!

I loved the cat fights between Alexis and Krystle, especially the ones involving water or mud!! The infamous one I remember was the lily pond. Alexis fought with her tongue and Krystle with her fists!! Both extremely strong women. I liked the romance between Adam, Kirby, Jeff and Fallon. Steven’s storyline was the first time I became aware of homosexuality. I was a little confused as he then, for a few seasons had a loving relationship with Claudia. Of course at the age of eight and nine I was unaware of bi-sexuality which I now obviously realise Steven was but it made me realise, even at that young age, that love is love. I also remember the furore when Rock Hudson joined the cast and kissed Krystle. It was announced that he had HIV Aids. It was unknown then that Aids could not be transferred through kissing and I remember the family discussing over the kitchen table how brave she was to risk the infection. This was the time when everybody was terrified of Aids and how you could catch it. Thankfully there was been so much understanding, information and treatment and it is no longer a death sentence for many.

I was devastated when Dynasty finished and I was delighted when I heard there was to be a reunion. I was very upset that there had to be a change of actor for the character Adam. It was almost as if it was a completely different character. I was disappointed that Dex Dexter was not in it as I felt he was a good match for Alexis.

I do love the new Dynasty but in its own right and not as a remake of the original. I would love a drama of the early years, as I would love to find out about Alexis and Blake in the early years and what really happened!! Oh what it would be like now! I know we have sadly lost John Forsythe and Christopher Cazenove and yes that would change the dynamics of a remake but we still have the beautiful Linda Evans and the stunning Joan Collins, and the younger cast. I would love to know how Little Blake, Danny, Lauren and Krystina are doing running Carrington Enterprises and Colby Co. Do you not think it would be interesting? Bring it to a new generation?

Here is a reminder of the characters in the original Dynasty.

Born Joan Henrietta Collins May 23rd 1933, London
Some Notable Work; The Stud, The Bitch, Our Girl Friday, Sins, Dynasty, The Girl In The Red Velvet Swing, Hart to Hart, Legends; play with Linda Evans. An Evening with..
Author.

These were the main characters initially, joined throughout the years by many more! Has this revived the memories or have you never heard of Dynasty? Do you have a favourite programme or are there so many programmes now that it is unusual to have this kind of obsession as programmes are now so readily available? I would love to hear your thoughts.

When it rains look for rainbows!

All photographs, unless stated, are the copyright of Lorna Liza